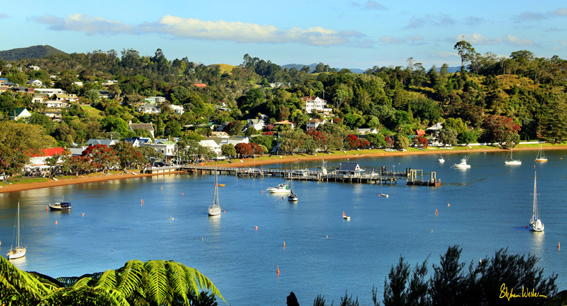 There is so much heritage, history and culture in the Bay of Islands, rich in Maori and pre-European stories of how the country was settled. On the Bay of Islands Walking Weekend we have introduced a new walk this year which brings these stories to life.  It makes a huge difference being in a location and really understanding what went on – often in the spot you are sitting.  “Mana, missionaries and mayhem” sets the scene perfectly for your time in Russell.

Russell (Kororareka as it was then known) was once the main trading port in Aotearoa, with the infamous reputation as the ‘hell hole of the Pacific’. Home to American whalers and traders of all nations, it was a scene of ‘uncivilised behaviour’ described by Charles Darwin in his visit to New Zealand in 1835 as ‘the land of cannibalism, murder and all atrocious crimes’.

It was known then as the biggest whaling port in the Southern Hemisphere and turned out to be a bit of an eye opener for the missionaries. Up to 500 whalers at a time would arrive in Russell after twelve months at sea, and with Russell having no effective law enforcement agency, the scene was not ideal. Prostitution was one of the area’s largest industries and many local women frequently entered 3-week marriages.

It is anything but that today as your guided walk in this enchanting seaside town will soon reveal. Indeed, alongside this picture of ‘vice’ ran the voice of ‘virtue’ as Missionaries sought to convert local Maori (and anyone else who would listen) to Christianity.

There is a decent hike up through magnificent Kororareka Point Reserve to Te Maiki Hill where a party led by the famed Maori chief Hone Heke felled the flagstaff for the final time in 1845 sparking the Battle of Kororareka, the first of the Northern Wars. Take in New Zealand’s oldest surviving church, Christ Church built 1836, where bullet holes from musket fire of the Northern Wars can still be seen in its walls, and New Zealand’s oldest factory – the 1841 Printery, Tannery and Bindery at Pompallier Mission.  Oldest factory makes it sound somewhat dull!  Pompallier Mission is anything but – it’s set on the water’s edge and is a stunning French building set in gorgeous grounds.

Finish this walk with a taste at New Zealand’s oldest licensed hotel The Duke of Marlborough.  The Duke of Marlborough began its life in 1827 as “Johnny Johnston’s Grog Shop”. The owner Johnny Johnston was an ex-convict come good, he became fluent in Te Reo Maori and was very well regarded by the local Maori. This relationship led to Johnny being able to purchase the freehold site of the Duke – which was one of the first land sales to a European in New Zealand.  To sit on the deck enjoying a cold drink overlooking the water is a real pleasure – made more so as you imagine the days gone by.

This walk is fascinating and includes a private tour of Pompallier Mission and a drink at the Duke.

The Bay of Island Walking Weekend has over 20 walks to choose from, it is in its 7th year and has many repeat walkers coming each year which speaks volumes for the event.   You can walk the islands – travelling out by sail boat, tall ship or launch, we walk to vineyards for tastings and platters,  stroll past oyster farms and enjoy seafood feasts, stay overnight at Iconic Cape Brett, we walk and kayak and we walk and bike!   The weekend is over 3 days, walks are guided, and group size is limited.  It is a fun social weekend right in the heart of the Bay of Islands. 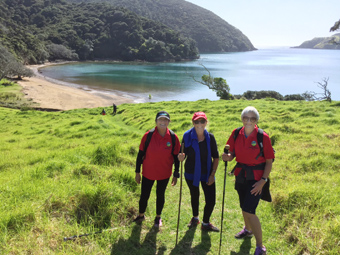 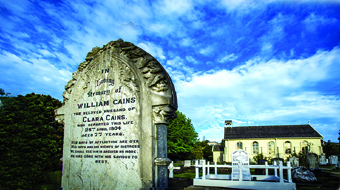 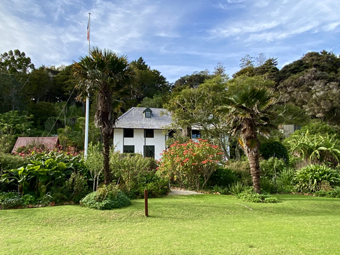 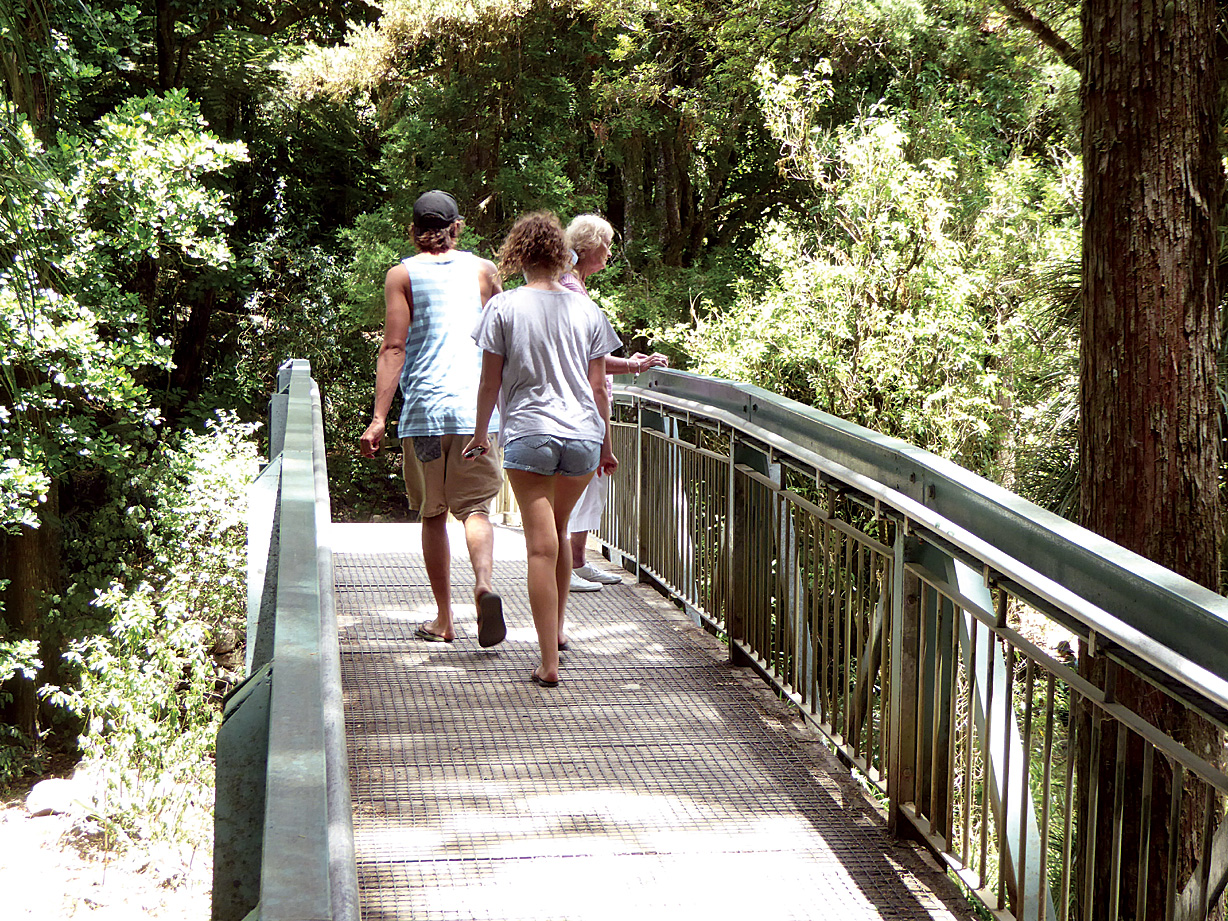 Whangarei Falls – A walk not to be missed

A popular walk in Whangarei, just a few minutes drive from the CBD, is the Whangarei Falls walk.

The walk loops around the waterfall, down one side, crossing a footbridge at the bottom and back up the other side. It has well maintained tracks and is suitable for all ages although both sides of this circular track do zig zag down steep slopes to the lower bridge.

An easy walking path leads to the upper waterfall’s lookout. It takes only two minutes to reach this lookout, and the walk is suitable for people of all abilities. Take the track to the left to the waterfall’s base, cross the river via a concrete bridge and follow the track.

One minute after crossing the river you’ll see one more upper lookout – don’t miss it. It will take five minutes to reach the waterfall’s base from this lookout and then five  minutes to come back to the carpark using the same track, or return via the 30-minutes’ loop track. This track has the stairs and not suitable for wheelchairs/strollers

The picturesque waterfall is 26.3m high and falls over basalt cliffs. The two viewing platforms above the waterfall give spectacular views of the falls and a birds eye view of the forest below.
Don’t be disappointed! Whangarei Falls is a type of waterfalls which may have little or no water at all during a dry summer. Hence, if the summer is dry with no rain for a few weeks, please don’t expect to see a powerful waterfall. There is a lovely picnic area and public toilets by the carpark.

The walk accesses the AH Reed Kauri Park, with 500 year old kauri trees, and is the uppermost section of the complete Hatea River walk.
Enjoy the sights, sounds and smells of native New Zealand bush. Trees include nikau, totara, manuka, to kouka (cabbage tree) and ponga (tree fern) and birds that you may see and hear include kukupa (native wood pigeon), tui and riroriro (grey warbler).

Traditionally this area was a good eeling spot for the local Maori and around the turn of the century it was a popular picnic spot (and still is today) for Whangarei residents.
The base of the falls may once have been tapu (sacred) as the pools below the falls were once used for washing the wounded and dead, and was known to Maori as an area of healing.
In the late 1920’s, Mr Archibald Clapham brought the property, reputedly to prevent the falls being developed as a commercial watermill. In 1946 a local businessmen’s association raised the purchase price by public subscription and the property was vested as a public domain in 1958.

Whangarei Falls is roughly a 10-minutes’ drive away from Whangarei city center, or 2.5-hours’ from Auckland. The road surface is always sealed.
Make your own way to Whangarei, then follow the signs ‘Whangarei Falls’ until you reach a car park at Boundary Road. The area is very well maintained and has toilets as well as a beautiful picnic area with a few tables. 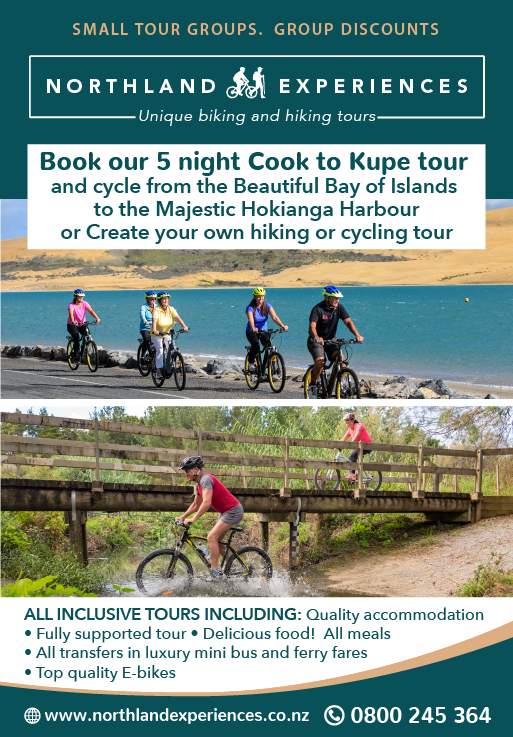