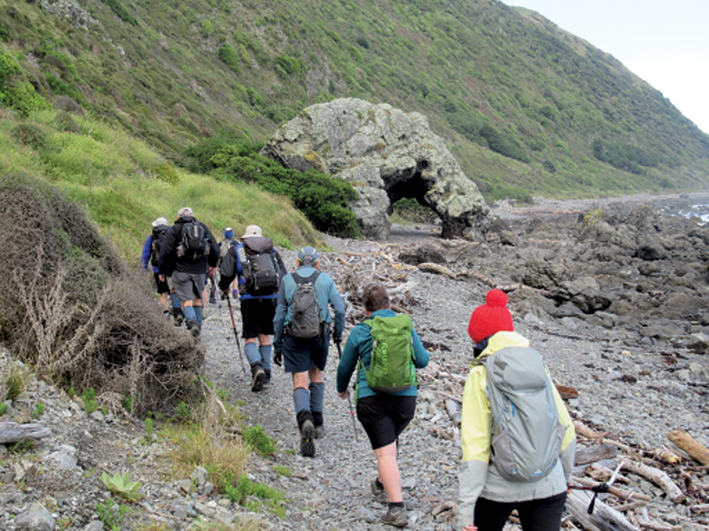 Wednesday Trampers go to the Seaside

In November, 18 intrepid Wednesday trampers and a small dog left Memorial Park at 7.30am for their annual trip to the beach at Pukerua Bay north of Wellington.

On our way south, the weather looked rather threatening, with low cloud over the Tararua Ranges (using the terminology recommended in Backcountry), but clearer out to sea. We assembled at the end of the Pukerua Bay Beach Road to walk round the Wairaka Headland to Plimmerton and return via the inland route.

There was a chilly breeze from the West as we set off, but this dropped once we rounded Wairaka Head and the weather from thereon was fine and sunny.

The path is flanked by steep grassy slopes on which a number of feral goats were seen grazing. We soon reached a strategically placed wooden gate leaning against the rocks which is easily climbed and then after a scramble round the  headland made it on to a long sweep of beach. This consists of large pebbles and small boulders, which need care in negotiating.

On the way, we encountered a small dead blue penguin washed up on the beach. There is plenty of driftwood at the high tide mark, and after an hour’s walking we chose to sit on some largish logs for morning tea.

The beach eventually leads to a further half hour’s walking on a gravel track heading towards Plimmerton. While on the track, we encountered a walker with two large dogs. An attempt to get them onto leads was only partially successful and one of them charged towards one of our trampers, but no damage was done.

Having passed through the Hongoeka Marae Village, we reached the boating club, where four of our number decided to head into Plimmerton and take the train back to Pukerua Bay.

The rest of us continued into the Karehana Bay Scenic Reserve, where we had lunch at the bottom of a long and steep flight of steps. These provided a challenge immediately after lunch, but the party all reached the top, albeit somewhat puffed.

We then headed up the Taua Tapu Track passing alpacas and donkeys on lifestyle blocks. The track reaches a trig at 114 metres and then descends to Airlie Road. We followed this past the Whenua Tapu Crematorium until we reached the Ara Harakeke walkway which runs parallel to SH1. This winds uphill for about two kilometres to the Pukerua Bay shops. Walking on the asphalt left some trampers in need of refreshment and it was disappointing to find the dairy’s ice cream chiller had lost power.

Another 20 minutes along Rawhiti Road led to the Goat Track, which descends by a number of steep steps down to the beach. Everyone was back to the vehicles by 2.15pm to find the train travellers had arrived safely before us. We then reconvened for coffee and ice creams in Paekakariki.

It was generally agreed that this was the preferred route, rather than that in previous years, when we went inland first. Doing it this way meant the rocky beach was tackled at the start of the day, even though the finish involved the rather tedious walk up the shared cycle path. The statistics collected at the end of the day showed we had walked a distance of almost 17 kilometers. 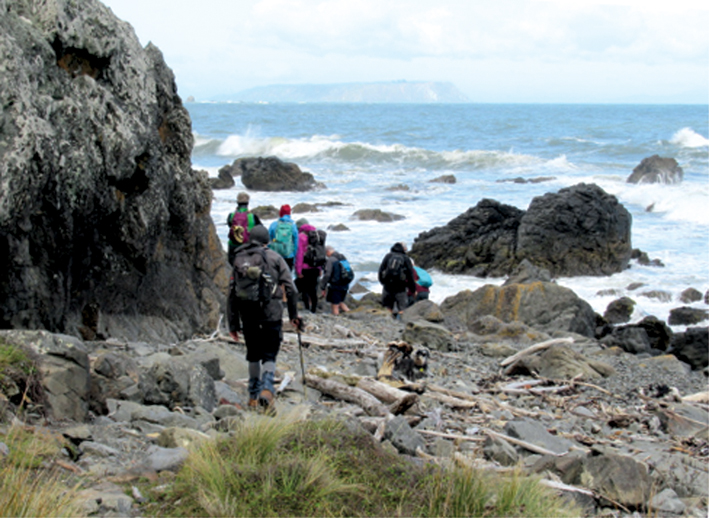 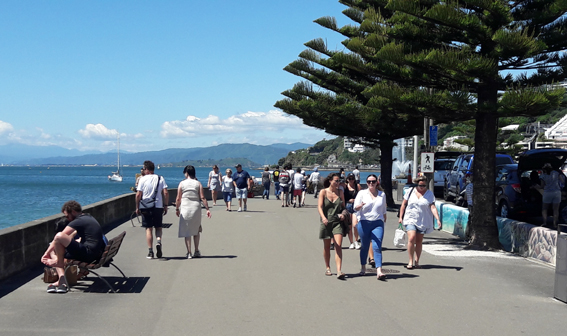 Spoilt for choice in Wellington

Lots of amazing walks in our Capital city

For a capital city with an ever-increasing population, Wellington has an amazing choice of walks, even close to the city. From my home in the city suburb of Oriental Bay, I can decide on a waterfront wander, east or west; a bush and hillside walk; a climb to the top of Mt Victoria or a stroll along suburban roads with flashes of water between the houses.

Downhill at the seafront I have two choices. Go east and watch the dogs on the beach in winter, the swimmers and sunbathers in high summer and all the variations of weather and people at other times.

The road follows the curve of the beach until it reaches Point Jerningham where I can round the point and walk on to the cosy little curve of Balaena Bay. Here I often see windsurfers skipping across Evans Bay like syncopated butterflies.

If I choose to turn west at the seafront, I pass the whale statue (pictured) which was donated to the city by its sculptor Colin Webster-Watson.

Further on, I watch the children playing on the jungle-gym where a small boy always seems to be climbing up the slide and colliding with a child sliding down.

Past the Tugboat café moored in its own the little lagoon, I like to drop down from the footpath and walk along the edge of the water past the blue-fronted boatsheds, enjoying the variety of craft in the lagoon and occasionally peering into any boatshed that’s open to see the conglomeration of sailing equipment inside.

Up and past Clyde Quay with its classy restaurant and apartments, I walk towards the city past the statue (pictured) of a naked man by English sculptor Max Patte. Called Solace in the Wind, it leans out towards the harbour and is a favorite spot for tourist photos. It was donated to the city 11 years ago by its Patte, originally as a parting gift to a city he had worked in and enjoyed. But  later he found he’d enjoyed it so much that, in fact, he decided to stay.

If I decide to turn uphill from my home instead of downhill, then the whole Town Belt is at my disposal. I walk up a zigzag pathway that leads to the Monastery where I can turn left and later right to reach Charles Plimmer Park and then the variety of tracks in the Town Belt. Here are bushy tracks that even the sharpest Wellington winds cannot penetrate.

If I take one direction, I look down over Oriental Bay or up into the bush with its half-hidden houses. I then have a choice of tracks leading back down to the beach. Other tracks can be taken to the top of Mt Victoria (my energy doesn’t stretch to that walk very often these days) or along towards Newtown where I can walk through bush. Occasionally gaps in the bush allow me to gaze across towards the Basin Reserve.

For the growing numbers living in apartments, which will increase in future years according to current estimates, these walks and many others near the city are of enormous value.

We are so lucky that, in early days, a Town Belt of trees was reserved to encircle the city. Although a few ‘bites’ were taken out of it occasionally in the past, it is now protected legally and is sancrosant. The Town Belt and the tracks within it are a precious heritage and must be diligently protected forever. 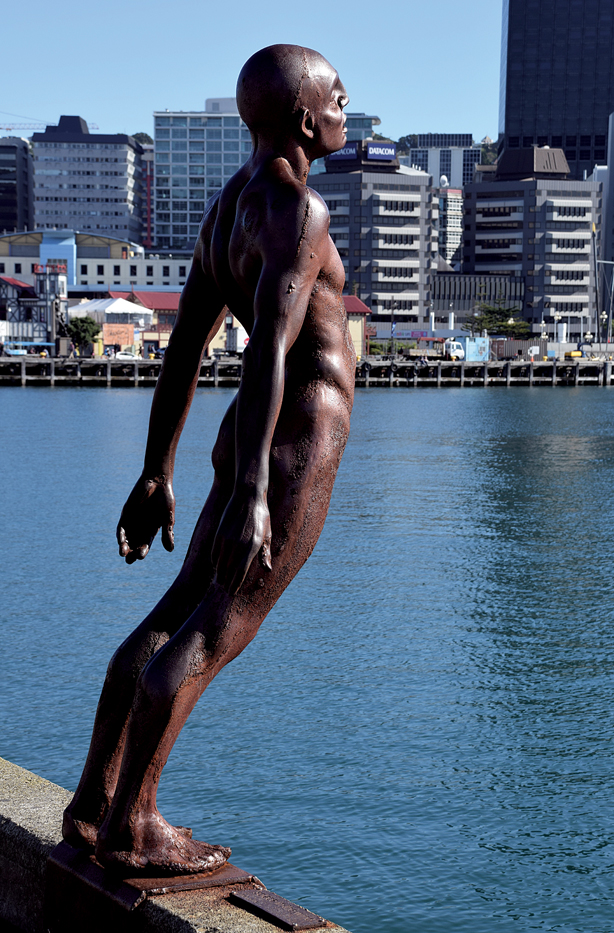